Strategy and investments of the company. Also is the Chairman Independent Energy. Prior to that served as CEO and deputy chairman of the Board of Akkuyu Nuclear.

Worked at Uralsib, in various management capacities, including the bank’s CEO, first Deputy Chairman, Board Member, Chairman of Uralsib Asset Management. Founded United Capital Investment Group, also was a member of the Supervisory Board of London-based M&A advisory Silkroutefinancial. Earlier worked in the banking system of Azerbaijan, where he served as the Deputy Chairman of the National Bank. Led negotiations with the IMF and the World Bank and structured first IMF loans received by the country. Was one of the founders of the Currency Control Law of the Republic of Azerbaijan. From 1995 he served as Board Chairman of the International Bank of Azerbaijan. Held various positions with the government and Azerbaijan President’s
Administration.

Mr. Akhundov is a graduate of the Azerbaijan State Oil Academy and the Business School at the University of Texas, he also holds degrees of the Japan Center for International Finance and the Joint Vienna Institute of the IMF. 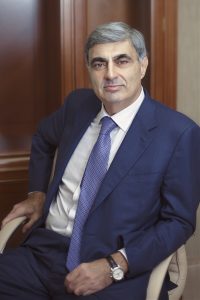